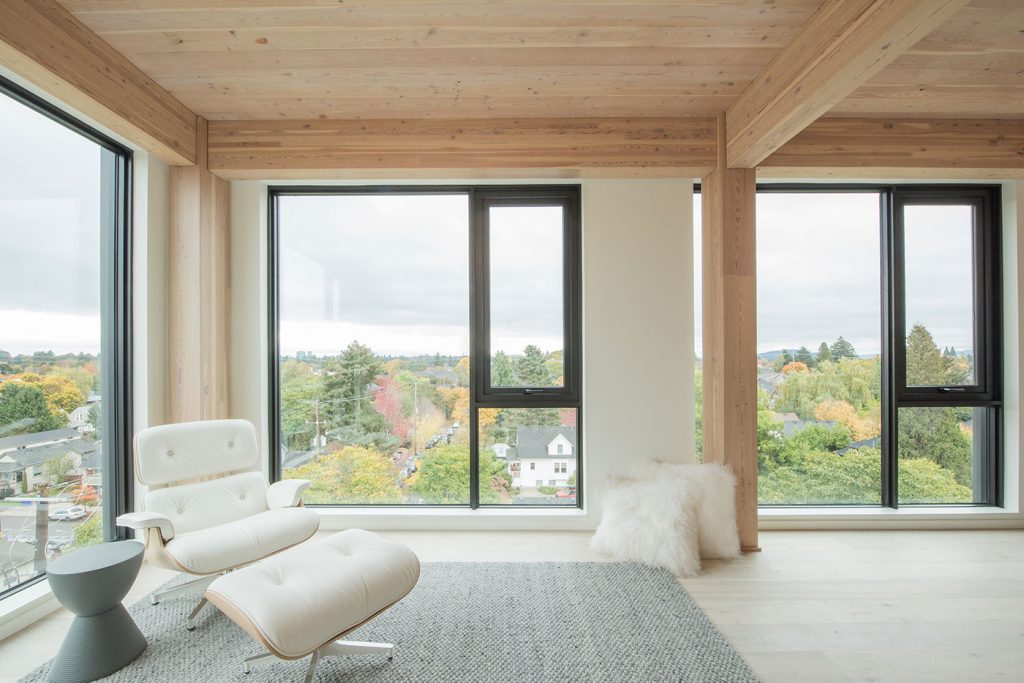 Mass Timber: The Sky’s the Limit

A revolution in commercial construction has begun with advocates proclaiming it could play a large part in much needed climate change solutions. Multi-story mass timber structures, also known as Tall Wood buildings, are defined as a primary load-bearing structure made of either solid or engineered wood – large structural panels, posts, and beams glued under pressure or nailed together in layers, with the wood’s grain stacked perpendicular for extra strength. Not only innovative, mass timber is superior to concrete and steel in many ways.

There is also a 25% reduction in construction time. The developers of a recently constructed credit union in Hillsboro, Oregon, reported they saved 2-4 months on the project. T3, a 7-story office building in Minneapolis, was erected in just nine and a half weeks, resulting in 90% less construction traffic.

Though lighter in weight, Tall Wood structures are strong, performing well during seismic events due to wood’s flexibility in the event of an earthquake. They also have fewer greenhouse gas emissions than building with other materials. Mass timber buildings are surprisingly fire-resistant; the surface chars but does not readily combust (protective charring phenomenon of wood). It’s like holding a matchstick to a tree—it’s not going to suddenly burst into flames.

Architects say the exposed wood interior in these buildings are warmer than other materials and far more aesthetically pleasing. Michael Green, architect-of-record DLR Group for real estate firm Hines, who builds mass timber structures in British Columbia, said some people walk into buildings he has designed and want to hug the wooden interiors. “The entire timber structure of T3 was left exposed and illuminated with a percentage of the interior lighting directed up to the ceiling. At night, the illuminated wood glows from the exterior similar to a lantern,” said MGA associate Candace Nichol in the Journal of the American Institute of Architects.

Starting to Catch On

In the past five years, 17 buildings of seven stories or higher have been completed worldwide, mostly in Europe and Canada. According to the American Wood Council, six more have started construction, signaling a new generation of Architectural design and construction practices.

HGA Structural Engineer Lauren Piepho recently stated at the US Green Building Council Event held in Minneapolis this summer, “mass timber buildings are absolutely coming to the Midwest, but the trend has been a little slow on the uptake.” She reported there are 545 mass timber projects in the US either already built, under construction, or in a design phase.

Carbon12 is one of the newest examples: an eight-story building in Portland, Oregon, completed in 2018, and named for the atomic weight of Carbon (12 amu) along with its street address (12 NE Fremont Street). This sleek, stylish tall wood design built with CLT (cross laminated timber) helped create a new class of sustainable, chic condos.

Among architects, manufacturers, and environmentalists, many want nothing less than to turn the coming decades of global commercial construction from a giant source of carbon emissions into a giant carbon sink by replacing concrete and steel construction with mass timber. That, they say, would avoid the CO2 generated in the production of those building materials and sequester massive amounts of carbon by tying up the wood in buildings for decades or even longer, perhaps in perpetuity.

Researchers from Yale and the University of Washington in a study published in the Journal of Sustainable Forestry, found using wood substitutes (pre-engineered) for constructing buildings and bridges could save 14-31% of global CO2 emissions. A Tall Wood building between 7-15 stories high would have the same emissions control as taking more than 2 million cars off the road for one year.

Andrew Ruff, of Connecticut-based Gray Organschi Architecture, a leading proponent of the laminated wood revolution, put it this way, “Say the typical steel and concrete building has an emission profile of 2,000 metric tons of CO2.  With mass timber you can easily invert so you are sequestering 2,000 tons of CO2.  Instead of adding to climate change you are mitigating climate change.  That’s the goal.”

Tall Timber Construction is Looking Up

Though height restriction is currently set at 8 stories for Tall Wood construction, the International Building Code Council has created a Tall Wood Ad Hoc Committee for looking into possible code changes for the 2021 IBC. With plans already in the works for projects such as an 80-story high-rise in Chicago called River Beech, another, The Splinter, to reach 100-stories in London, and Sidewalk Lab’s massive $1.3 billion master plan set to turn Toronto’s industrial waterfront into a smart, digitally connected city prototype constructed entirely of mass timber, the sky is actually starting to look like the limit.

Making the mass timber movement work, proponents say, is essential. “If you look 30 years down the road to 2050, we’re projected to have 2.3 billion new urban dwellers,” said Ruff. That is a huge amount of construction. Every day that goes by that we don’t convert from mineral-based extractive construction techniques to carbon sequestering building systems, we tend to dig ourselves further in a hole.”

“So,” he added, “the question is, how can we grow this fast enough to be a solution for climate change?”